History of the Halston Estate in Shropshire

Halston’s recorded history goes back to before the Norman Conquest. Known as ‘Holy Stone’ in medieval times, it was then one of many great estates held by the powerful Knights of St John, a brotherhood founded to protect pilgrims travelling to the Holy Land.

The influential Mytton family, whose lands included 32,000 acres in North Wales, moved to Halston in 1549, and lived here until after John Mytton died, nearly 300 years later.

Today’s house of mellow brick embellished with equally attractive stonework was built in 1690, then ‘modernised’ by Robert Mylne in the 1760s. His talents created one of Shropshire’s most noteworthy 18th century interiors, according to no less an expert than Sir Nikolaus Pevsner. His authoritative ‘Buildings of England’ devotes one and a half pages to Halston.

The southern façade of the house overlooks lawns, two lakes and Halston’s private chapel, one of only two timber-framed churches in Shropshire. Experts believe that the chapel was built in the second half of the 15th century.

Squire Mytton gambled, drank six bottles of port a day and devoted his life to the robust pleasures of a country gentleman. He ‘invested’ £10,000 to become MP for Shrewsbury, but spent less that half an hour in the House of Commons.

Madcap pranks made Mytton a legend in his own lifetime. A drunken friend was put to bed with two bulldogs and a bear. Mytton went duck shooting by moonlight on Halston’s frozen lake, dressed in only his nightshirt. Disguised as a highwayman, complete with his blazing pistols, he ambushed departing guests on the Oswestry road.

‘Mad Jack’ lost his money, but not his friends. Three thousand people attended his funeral. He is buried in the Chapel at Halston. 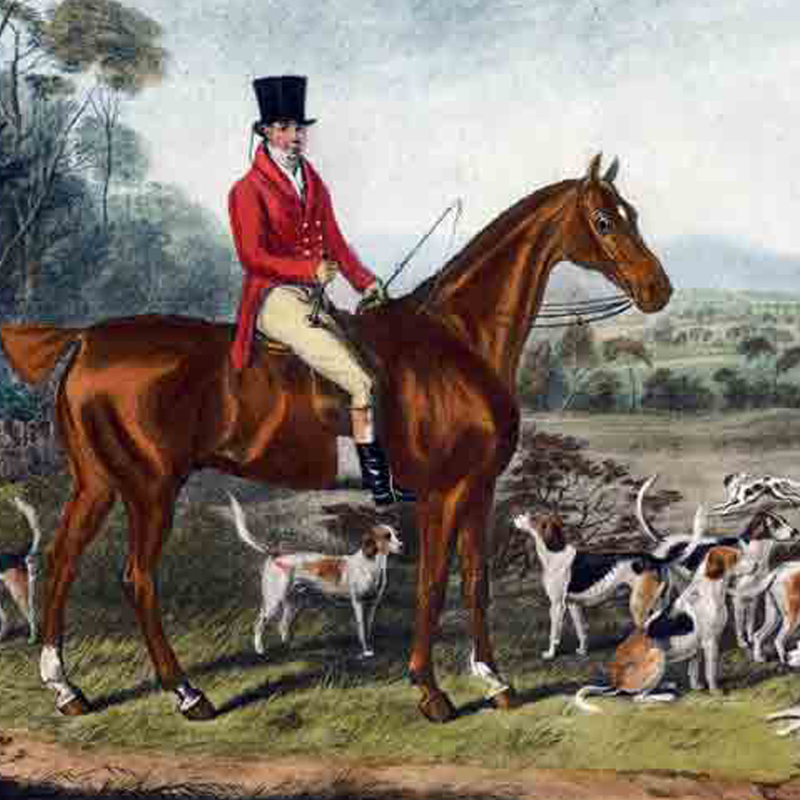 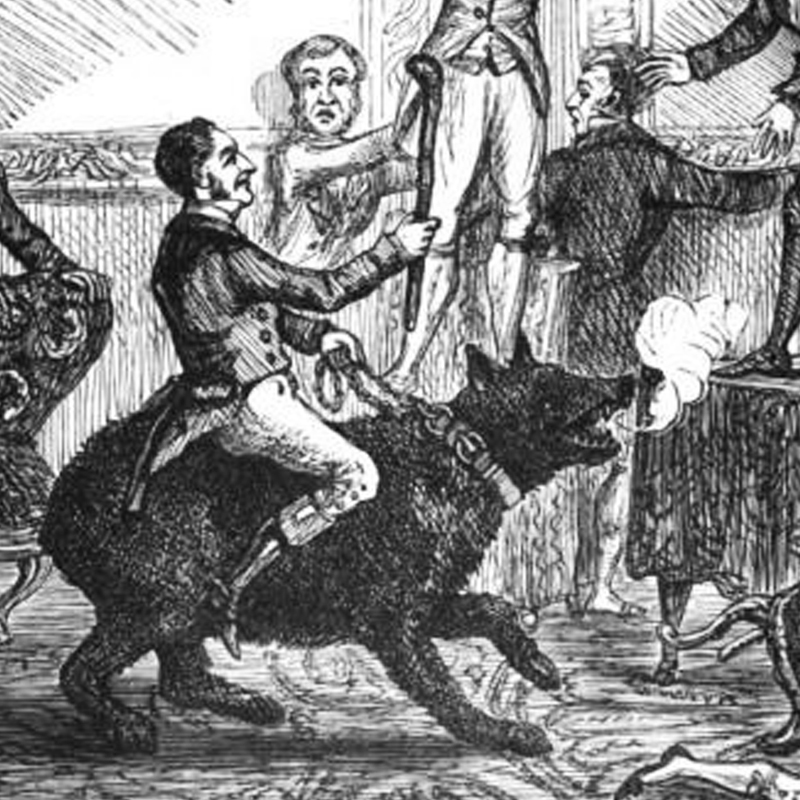 The Hospitallers Preceptory at Halston was founded between 1165 and 1183. The whole estate had come into the hands of Richard Mytton by 1551, but with the Marian reaction, the revival of the order and the appointment of a Preceptor to Halston in 1558, he may not have felt secure in his possession until sometime after the accession of Elizabeth.

The only building on the former site of the Preceptory is the chapel. It is a timber-framed structure, 40ft by 21ft, consisting basically of three 13ft compartments. The east two are divided into half-bays by intermediate trusses; the west compartment is in two unequal parts, divided by a main truss. The framing is in close-studding of very heavy scantling; the south-east & south-west corner posts have jowelled bases similar to those in the “Trotting Horse” at Shrewsbury and in the original framing of Lloyd’s Mansion in Oswestry. The building stands upon a stone plinth; the chancel projection on a brick one.

The trusses are richly moulded; the intermediate ones are notched over the wall-plates; the rafters have a double ogee moulding. The roof is without a ridge and has V-struts above a collar; struts and principals are heavily cusped, forming a quatrefoil at the apex and trefoils at the sides, similar to the roof of Ludlow Guildhall. The spandrels of all the main trusses are carved in a bold coarse style with a variety of subjects which includes a lion, two horned beasts, a wyvern, a bearded face beneath a mitre and another similar face, and an otter (?) with a fish in its mouth.

The windows are regularly spaced. They have moulded timber mullions, set very wide apart and flat heads. The mullions are stopped at the base but not at the head and some have been renewed, but there is nothing to show that they are not the original openings in their original form. There is nothing to suggest that there was ever a north or south doorway. The window in the slight projection at the east end has a segmented head.

The internal layout, with most of the seating arranged along the north and south walls, but with pews to north and south at the east, is presumably of the same age as the panelling of circa 1600. A pulpit dated 1725 now occupies the former north pew; and the reredos in the projection is probably contemporary. At the west, and carried by the west-most main truss, is a gallery with a Hanoverian Royal Arms upon its east face. The truss has been modified and some re-used timbers inserted into it, but it was always lower than the others and slightly less decorated. The west tower is of brick with openings with two-centred heads. It appears in a drawing of 1789 and is presumably of mid-to-late 18th century date.

Any account of Halston chapel is beset with problems – whether the chancel is an addition, whether the west gallery originally carried a belcote – of which the most contentious and important is the date; previous suggestions have ranged from late 14th to early 16th century. The most reasonable conclusion from the structural evidence alone is that it is of 15th or perhaps late 14th century date; but the form and material of the building, the nature of the apparently original fenestration, and the “Jacobethan” look of the decoration upon the main trusses might seem to rule out a date before 1550. That conclusion is supported by the evidence of the heraldry. Among the carvings on the main trusses are what appears to be a double-headed eagle, the arms of the Myttons, and what is certainly a Bear-and-Ragged-Staff. That famous Beauchamp badge was used by several later families, including the Grevilles; and in 1552 Edward Mytton of Habberley, son of Richard Mytton, married Anne, daughter of Sir Edward Greville. Their son, Edward Mytton of Halston, was born in 1553, succeeded as a minor in 1568 and died in 1583. Either Edward might have wished to emphasise his Greville connections, but since it seems to be the second Edward who established himself at Halston he is the more likely candidate for responsibility for the chapel. The best bet therefore is that the building was erected between his coming of age in the mid-1570’s and his death in 1583, but a slightly earlier or even a considerably later date cannot be excluded. What seems certain in the light of present knowledge is that a date before the second half of the 16th century can be firmly ruled out. And that, it will appreciated, has disturbing implications for the dating of several secular and ecclesiastical structures in Shropshire and Cheshire.

FOOTNOTE: Since the foregoing was written, dating of timbers used in the chapel construction, taken together with the historical practise of using timber for construction without a period for seasoning, now suggests that the building was constructed in the second half of the 15th century. If accurate, this would then require a different conclusion to be drawn. Could it be for example that the basic chapel was constructed in the latter half of the 15th century and then carved and decorated internally by the Mytton family (Edward and/or his son of the same name) during the succeeding years? 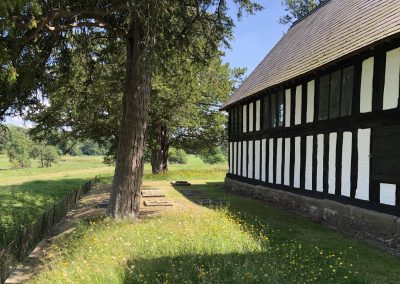 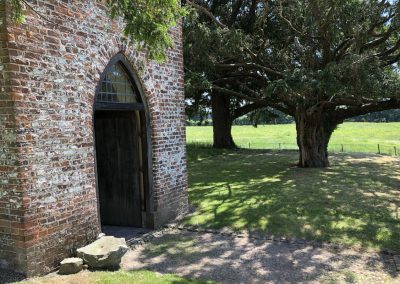 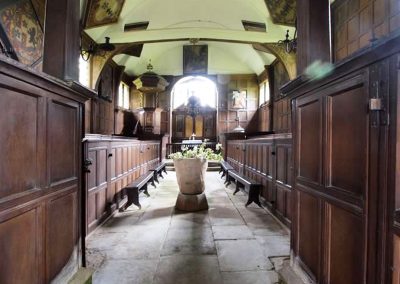 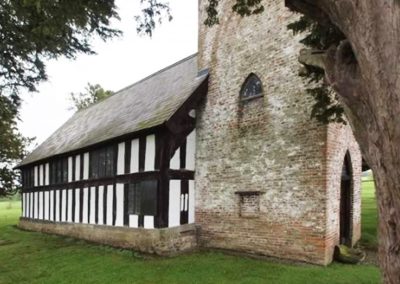 Halston has a number of cottages available to rent. With excellent transport links and beautiful countryside on your doorstep, the estate really is a superb place to live.

We are delighted to offer a top-quality simulated clay game shoot. Our aim is to provide our guests with a number of drives in a lovely environment and a fun social setting.

Find Out More
This site uses cookies. You can manage use of cookies through your browser settings. By clicking “Accept All”, you consent to the use of ALL the cookies. However, you may visit "Cookie Settings" to provide a controlled consent. Read More
Cookie SettingsAccept All
Manage consent

This website uses cookies to improve your experience while you navigate through the website. Out of these, the cookies that are categorized as necessary are stored on your browser as they are essential for the working of basic functionalities of the website. We also use third-party cookies that help us analyze and understand how you use this website. These cookies will be stored in your browser only with your consent. You also have the option to opt-out of these cookies. But opting out of some of these cookies may affect your browsing experience.
Necessary Always Enabled
Necessary cookies are absolutely essential for the website to function properly. These cookies ensure basic functionalities and security features of the website, anonymously.
Functional
Functional cookies help to perform certain functionalities like sharing the content of the website on social media platforms, collect feedbacks, and other third-party features.
Performance
Performance cookies are used to understand and analyze the key performance indexes of the website which helps in delivering a better user experience for the visitors.
Analytics
Analytical cookies are used to understand how visitors interact with the website. These cookies help provide information on metrics the number of visitors, bounce rate, traffic source, etc.
Advertisement
Advertisement cookies are used to provide visitors with relevant ads and marketing campaigns. These cookies track visitors across websites and collect information to provide customized ads.
Others
Other uncategorized cookies are those that are being analyzed and have not been classified into a category as yet.
SAVE & ACCEPT
Powered by